Population count:  Steller sea lions are the most common species of sea lion on Vancouver Island and numbers are estimated close to 25,000 in British Columbia. And an estimated 240,000 worldwide.

Identifying Features:  Steller sea lions are the largest species of sea lion in the world. They are a golden brown color and a dark chocolate brown colour on their flippers and underside, when dry. They appear darker brown or black when wet.

Males have a thick mane and females have smooth fur on their necks and heads. Their main sources of insulation is their thick coarse fur and blubber. These two things protect them from the cold waters and jagged rocks. Steller sea lions also have facial whiskers which they use to sense prey and feel their way underwater. 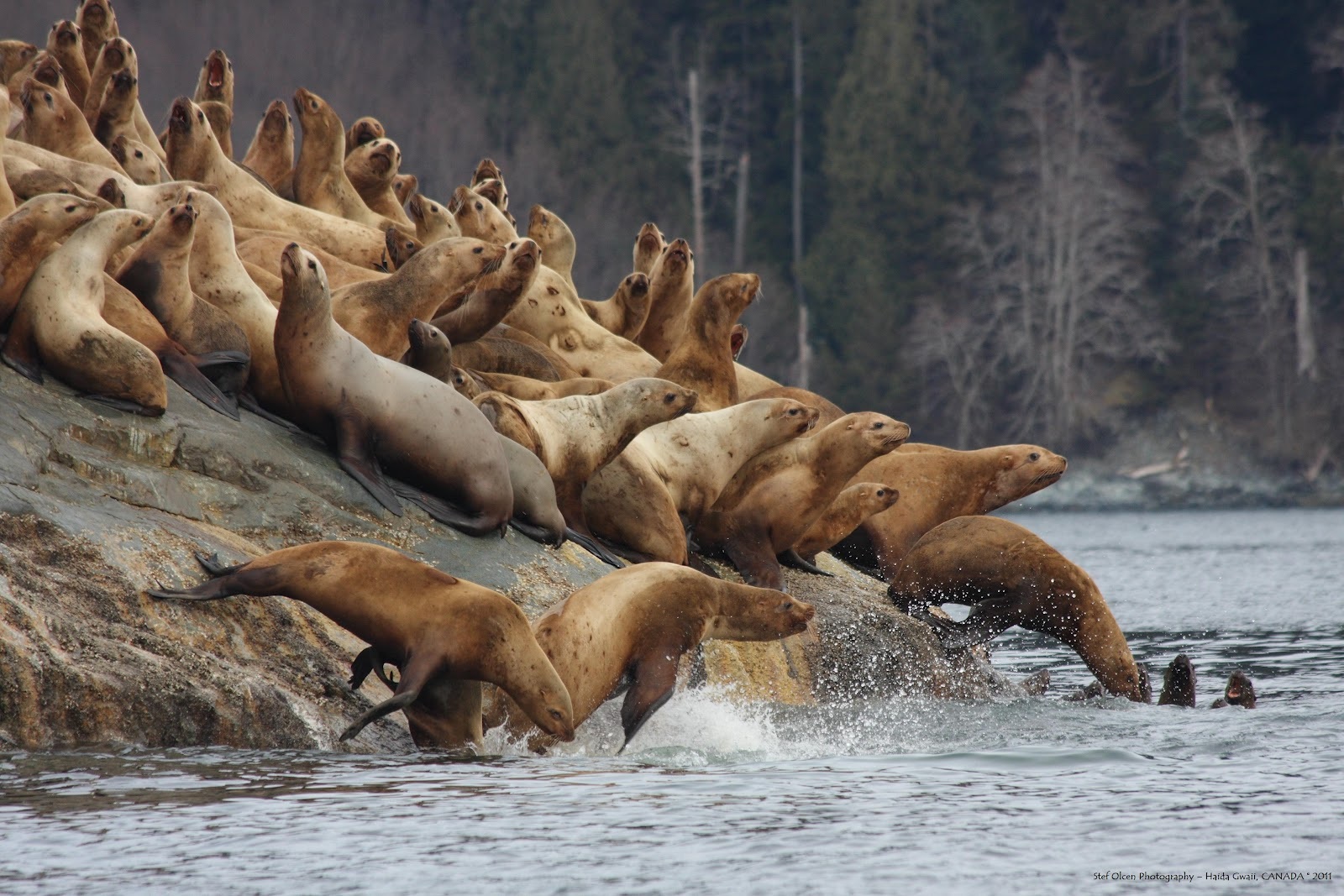 Habitat:  About 70 percent of the Steller sea lion population live in Alaska. However, they range throughout the North Pacific Ocean from southern California, north to the Bering Strait, and south along the Asian coast to Japan. They need both terrestrial and aquatic habitats. They mate and give birth on land, at traditional sites called rookeries. Haul-outs and rookeries usually consist of beaches (gravel, rocky, or sand), ledges, and rocky reefs. In the Bering Sea and Okhotsk Sea they sometimes also haul out on sea ice.

Prey:  Steller sea lions are carnivores and forage for the most part between intertidal zones and continental shelves. They fed on a large range of fish including pacific herring, sandlace, pollock, salmon,cod and rockfishes. They eat octopus and squid and occasionally smaller seals. Typically, an adult steller sea lion requires approximately six percent of its body weight every day.

Predators:  Steller sea lions are some of the largest carnivores in the ocean so considering the sheer size of them, they have very few known predators but they have been known to be threatened mainly by killer whales and occasionally certain species of sharks such as sleepers or great whites have been known to prey on juvenile sea lions.

Mating/Breeding:  Steller sea lions are colonial breeders. They have a polygynous mating system, in which only a small proportion of the sexually mature males father most of the pups in a given season. Adult males, also known as bulls, establish breeding territories on rookeries that they defend through the whole breeding season, (1 to 2 months) not even leaving to eat. Bulls become sexually mature between 3 and 8 years of age, but typically are not large enough to hold territory successfully until 9 or 10 years old. Females begin to arrive on rookeries in mid-May. Females typically mate for the first time at 4 to 6 years of age, usually giving birth to a single pup each. At birth, pups are about 3 feet in length and weigh 35 to 50 pounds. Females usually mate again within 2 weeks after giving birth.