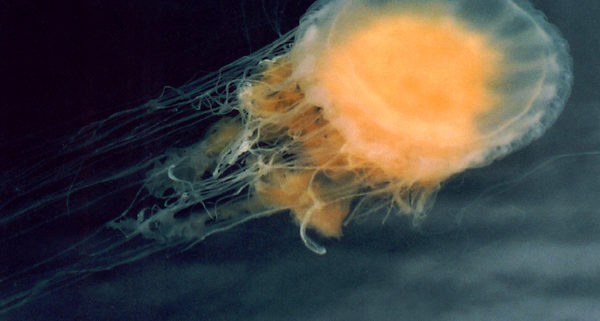 
Identifying Features:  The Fried Egg Jellyfish gets its name from its appearance. Its bell, measuring up to 60cm (24 inches) across, is white or light yellow.  It has a yellow center circle (referred to as a gonadal mass), making it look like a fried egg against the whitish bell. Inside it’s bell there are 16 large lobes with smaller lobes inside containing 25 clusters of folded tentacles. The smaller ones are often colourless or an opaque white. The Fried Egg Jellyfish moves in slow pulses.

Habitat: P. Camtschatica can be found worldwide in temperate oceans. It alternates between benthic(lowest level of the ocean) and pelagic(region far from shore and ocean floor) stages depending on its reproductive cycle. Most people would be familiar with the medusa stage of the jellyfish when it’s swimming close to docks or the shore near the surface of the water. These jellies have been studied mostly at Monterey Bay Aquarium.

Food:  Fried Egg Jellyfish eat gelatinous zooplankton, smaller jellyfish and little crabs. Their tentacles can be 10 to 20 feet long.  They discharge their stingers in a harpoon like motion after being coiled in capsules filled with a “stinging” fluid.   The stinging apparatus is called a nematocyst and it is in a specialized cell called a cnidocyte. Smalls crabs often ride on the Fried Egg Jellyfishes bell and steal food from it.  According to Wrobel and Mills (2003) it only has a mild sting.

Predators:  The green turtle is one of the well-known predators of the Fried Egg Jellyfish, but unfortunately their numbers are declining, leaving more jellies.

Lifecycle:  The Fried Egg Jellyfish sexually reproduce in the medusa stage of life which is the stage that looks like a typical jellyfish.  After the eggs are released from females and sperm from the males, the resulting fertilized eggs turn into a larva that eventually settles onto docks or the ocean floor.  They develop into small polyps.  The polyps will begin dividing asexually and will end up looking like a stack of bottle caps. The top individual on the stack detaches, now being called an ephyra, to float away and continues to grow into an adult medusa.