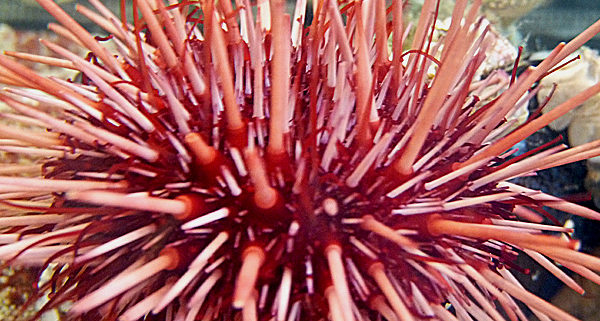 
Identifying Features: Like all sea urchins, the Red Sea Urchin has a round circular body. The body hides inside a hard shell that surrounds the body all around, called test. Red Sea Urchin’s test can be up to 6½ inches (7.6 cm) wide. The test ranges in colours from acidic red to purple. The test also has long spines attached to it. The spines tend to be darker than the test and can be up to 3 inches (7.6 cm) long. Sea urchins in general, have tiny holes in their tests. Thought these holes come through their tube feet. Sea urchins use those feet to move around and catch things.

Food: All sea urchins eat seaweed. The red Sea Urchins eat specifically the brown and red seaweed. Sea Urchins in general use tube feet to pass the food that they fin into their jaws, where their 5 teeth chop the food. Then, the nutrients are swallowed and digested.

Predators: Like turtles, Sea Urchins have a hard shell called test. Its test may give the sea creature some protection from its predators, although it can not hide under the shell like turtles do. Red Urchin’s sea predators include: sea stars, sea otter, octopus, crabs, and wolf eels. In Japan, people eat the Red Sea Urchin’s reproductive organs as a delicacy.

Life Cycle: Red Sea Urchins fertilize in water column. After a period the fertilized eggs develop into larvae. It takes 6 to 8 weeks for the larvae to develop into juvenile sea urchins. Adult urchins can live up to be 7 to 10 years old.