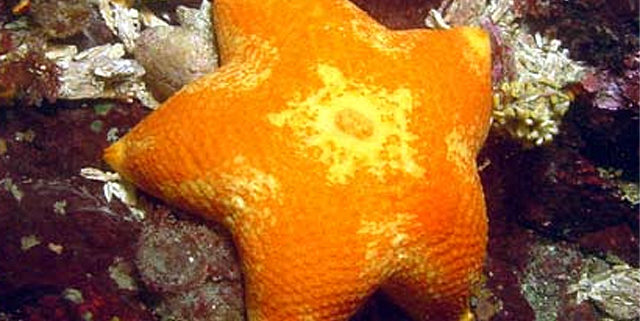 The Cushion Sea Star has a rounded pentagonal shape with a rigid and bumpy texture; they are very thick and resemble a pentagonal pincushion. A net-like pattern of small protrusions (ossicles-used for breathing) covers the top surface area, while suction cups (tube feet) cover the bottom. The stars can be red, pink, pale orange or purple. The young ones are usually green- brown.

These sea stars can be found in the Pacific and Atlantic oceans, ranging from upper-Canada to Central America. They mostly inhabit rocky areas. Young ones tend to be found in dense meadows of grasses or very rocky, uneven areas for protection.

Cushion stars are omnivores. They eat a variety of things from algae, diatoms, small detritus particles to clams and oysters, sea urchins, sponge tissue, crab larvae and other small organisms. In general, capture its food, the sea star will use their arms to force the prey close, then push their stomachs out the mouth and engulf the prey. The mouth is located on the bottom in the center and each arm contains 2 pyloric caeca tubes which branch from the stomach. These tubes secrete digestive juices and absorb the nutrients. The food then passes into the very small, short intestines which then pass through the anus.

Sea Stars generally have very few predators who are other animals as they don’t look very appetizing. However smaller sea stars need to watch out for larger ones who could possibly attack them. Some manta rays or sharks may be a threat to the sea stars. There are no specific predators found for the Cushion Star which were documented.

Currently the biggest concern for the Cushion Star is the environment. Throughout their habitats, they are being threatened by pollution, destruction and fishing. The coral reefs are also being threatened by global warming and acidification. Acidification is caused by increase of CO2 in the atmosphere, which raises the pH in the ocean.

Respiration occurs directly from water, through the ossicles. They then diffuse the water to obtain oxygen. This is why they are very vulnerable to water pollution; they don’t have the ability to filter out the waters contaminants.

Most Sea Stars do have a specific sex, male or female, which is not externally apparent; however some species can be hermaphrodites. Fertilization is usually external. To increase the chances of their eggs being fertilized, starfish may synchronize their spawning, forming in a group or forming pairs. This is called pseudo-copulation. Usually, the male climbs onto the female, placing his arms between hers, and releases sperm into the water. This stimulates her to release her eggs. Starfish may use environmental signals to time the spawning, and chemical signals to indicate their readiness to each other. When the gametes meet they form together the resulting embryos and larvae live as part of plankton.

In certain species the females brood their eggs either by enveloping them or by holding them in specialized structures. The developing young are called “lecithotrophic” because they get their nutrition from the yolk inside the structure, instead of planktotrophic feeding larvae. Brooding is especially common in polar and deep-sea Sea Stars that live in environments less favorable for larval development.