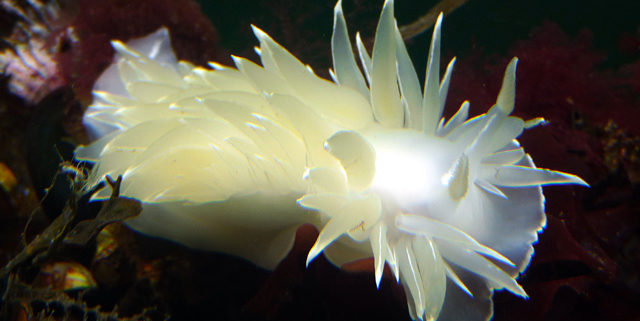 by Elias and Jesse

Frosted Nudibranchs are soft bodied organisms similar to slugs. In the general, nudibranchs are often referred to as sea slugs. Frosted Nudibranchs can range anywhere from 20- 600mm long, but their most outstanding, and identifiable feature, is the frosty white tips on the cerata on their back. They come in a wide variety of colours, including mauve and peach, and for the most part, they’re translucent. The Frosted Nudibranch is known to shed its cerata when stressed.

The Frosted Nudibranch thrives along the shores of Japan, Siberia, and Southern Alaska, to Southern California. It is found intertidally and up to 37m deep.

Most sea slugs have very specific feeding needs, thus making them difficult to keep in aquariums. The Frosted Nudibranch has powerful jaws enabling it to crack open snail shells. This nudibranch has a vast selection of prey including arboresent and foliose bryozoans, hydroids, small prosobranchs, crustaceans, and ascidians.

Nudibranchs are hermaphrodites. They have both male and female reproductive organs. In most cases, two separate organisms will exchange sperm. But there is a potential for self fertilization. Once the eggs are fertilized, they are laid in large amounts, often very close to a food source. Once hatched, they are in the trocophore larvae stage, characterized by a round shape, and numerous sensory and defensive hairs. The veliger larva stage is the stage in which young nudibranchs hatch. Eventually they abandon the water column, and travel to the bottom, becoming benthic. It is at this point, where they undergo metamorphosis, and become juveniles.