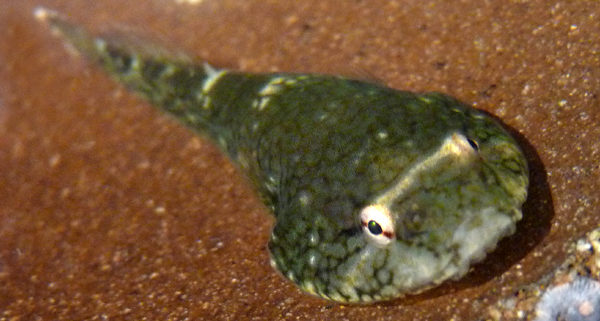 SIZE RANGE:  Northern Clingfish are generally 3 inches (7.6 cm) in length but may grow up to 6 inches (15.2 cm).  Most males are larger than the females.

HABITAT: The Northern Clingfish likes to stay low key and doesn’t like to be seen. It hides within seaweed and is often found stuck under rocks.  It is also found in tidal pools or on rocky shores.  The clingfish lives in the intertdial zone, which means that it lives within the low and high tides. The clingfish is often found among species of fish including gunnels, and sculpins.

FOOD:  Like all animals the clingfish likes to eat what it can find, but it generally eats small crustaceans like shrimp and small mollusks. It may prey on limpets or chitors. Its mouth and sucker disk are adapted for hunting. While its prey (limpet) is on the rock it stays stable with its sucker disk and with its mouth pries the limpet off the rock. The clingfish is an aggressive feeder and in artificial habitat will quickly take food or bite your finger. Clingfish can be cannibals and they will eat their own kind.

PREDATORS:  The clingfish blends in with its surroundings making it hard for predators to attack. However, at low tides, these fish cling to rocks which are over turned by gulls and raccoons that forage close to shore and eat them.

LIFE CYCLE:  In the spring the mother clingfish lays her eggs under a rock that she thinks will be safe. Then the male comes along and squirts his sperms and voila most of the eggs are fertilized and you have baby clingfish. A baby clingfish starts off as small platonic larvae, and then it will begin developing.  During this time the male protects the babies. Most often the babies will stay near the rocks even though they are very curious.