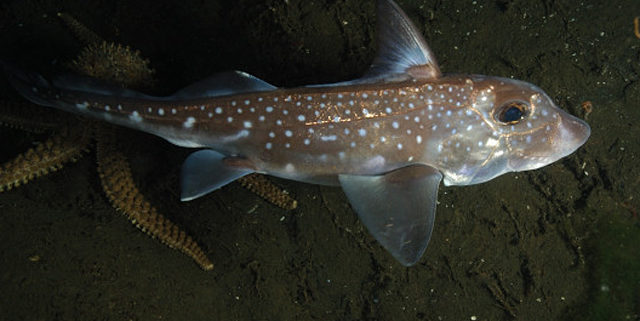 
Identifying features : The Spotted ratfish is a cartilaginous shark relative. It has many distinctive features and is in the chimaera family. It is said to look like a rabbit and its scientific name: Hydrolagus colliei, literally translates to “water hare.” The H. colliei has plate-like permanent teeth and a large, bulky, snout-like snub nose.  The Spotted Ratfish’s body tapers towards its posterior end and composes about half of its length. The spotted Ratfish can reach sizes of 14-20 inches long (body length) and females usually reach a height of 10 inches at their mature stage, most young specimens tend to measure in at around 5 inches. The Spotted Ratfish has a large, sharp and venomous dorsal fin that can inflict a painful wound; and a long, leaf-like and delicate fin follows the dorsal. This long fin undulates which gives it the appearance of being three separate appendages. The Spotted Ratfish also has two pectoral fins which extend straight out from its body, similar to airplane wings. One of the H. colliei’s most distinctive feature is it smooth, scale less and iridescent skin. Its colouring can range from silvery to a golden green usually with a darker brown background that reflects light; the fish is also usually covered in white, opalescent spots which helps add to its distinctive luster. Another particular feature is the Spotted Ratfish’s large eyes; they are often green in colour and reflect light, much like those of a cat.

Habitat: The ratfish is usually found in depths of 1000-2000 ft. deep in anywhere between southern pacific waters to northern pacific waters. It may also be found in some parts of European waters. A great place to see the spotted ratfish locally while diving is just off of Ogden point, Victoria, British Columbia. The ratfish tends to favour waters near the cost of B.C, California and Alaska. When food in the deeper waters becomes scarce the H. colliei will often move to shallower waters, hanging near the ocean floor.
Food/Prey : The Ratfish enjoys a diet of crustaceans, marine worms, small fish and mollusks. The ratfish is able to grind the shells with its plate like teeth. The spotted ratfish is also a chronicled cannibal, often eating their own egg cases as well as other ratfishes.

Predators : Marine species who feed on the Ratfish include different types of sharks such as the six gill shark, seven gill sharks, tope sharks, the spiny dogfish, and big carnivorous fish such as the giant sea bass, ling cod, rock fish, Pacific Halibut, and other marine mammals (such as seal, orcas, porpoises etc.) Humans do not consume the Ratfish as they are unpalatable, it can also inflict a painful wound with its venomous dorsal fin and may also give a painful bite.

Life Cycle: The Ratfish begins its reproduction cycle during the autumn/spring seasons by conducting complicated courtship patterns during the mating season; both sex’s complete distinct manoeuvers and the males undergo extensive color changes.  The females begin to expel eggs in pairs; they birth these eggs into muddy areas every 10-14 days and their fertile period will last several months.  The female ratfishes labor can last anywhere between 18-30 hours. The eggs then hang freely from their mother attached by a thin filament. They hang attached for 4-6 days until they are planted in the ground. The eggs begin to hatch around a year later, which means the baby fish goes through a long gestation period and is born relatively matured. The young usually appear from the case at approximately 5.5 inches and grow about 11.8 inches in their first year.