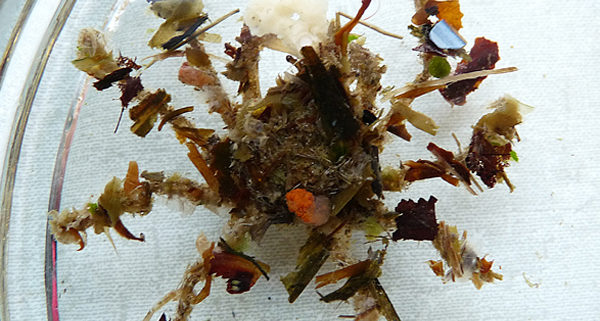 Size range: The Graceful Decorator Crab, measured across the carapace and including the legs, can grow up to 5 cm (2 inches).

Identifying features:  The Graceful Decorator Crab is the most spidery of all the intertidal spider crabs, and has long and slender legs. This crab has quite an amazing adaptation for camouflage: it has sharp spines all over its body that allow it to actively decorate itself with things such as bits of seaweed, little pieces of sponge and any thing else in their environment that makes them blend in. Also, the first legs have pinchers specifically designed for handling the decorations. If the Graceful Decorator Crab is taken from one environment and moved to another it will shed its previous decorations and use the new material. The crab is triangle-shaped as the carapace is wider at the posterior end. Underneath the camouflage, it is mostly reddish-brown.

Prey:  The Graceful Decorator Crab eats algae and kelp, plankton and the flesh of dead animals.

Predators:  One predator is the Pacific halibut and other possible predators include octopus, fish and sea otters off the Pacific coast. The effective camouflage of the Decorator Crab keeps it well hidden from predators.

Life Cycle: The spawning season is usually between May and August because that is when there are planktonic blooms. Males reach maturity after their last molt, which is about 9-11 cm and females reach maturity when they become about 8-10 cm.  Eggs that are ready to hatch are reddish-brown while eggs that have recently hatched are orange-red. 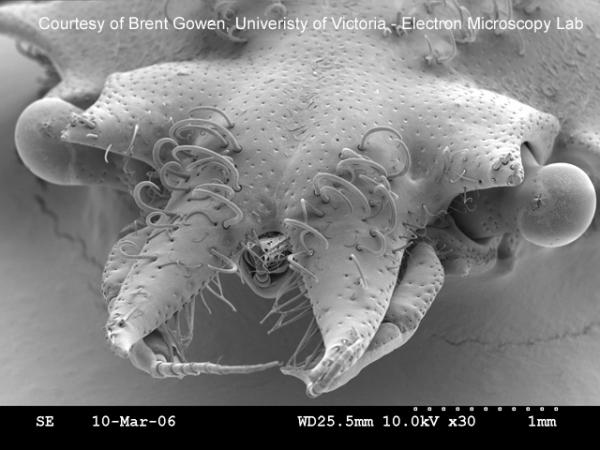