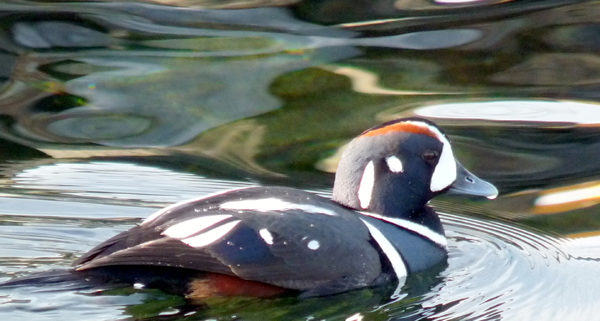 The Harlequin Duck is an especially handsome creature, due to the males having very similar colouring to a Jester. They have round heads with steep foreheads and stubby bills.  The males have distinctive white patches and stripes on the head and body. They have burgundy wings, with a metallic blue speculum. The females look far less interesting, being mostly dark brown and grey, with just a few white patches on their heads. The young ducks are somewhat like the females. They can often be identified by the spot between their eyes and the bill. They are also darker than the females and they look greyer. The males start to grow the distinct male plumage when they are about 2 to 3 years old.

H. histrionicus tends to live on rocky coastlines including bays and in exposed locations such as rivers and fast flowing streams. They can be found flying 3352 metres above sea level during the summer. In the winter they are usually around shallow waters where they spend their time feeding and resting. The birds go to their breeding grounds (streams), sometime in April or early May and don’t return to the sea until June.  They are commonly seen around the shorelines of Victoria and the Gulf Islands.

What few Histrionicus histrionicus nests have been found, have generally been near streams at the bases of stumps, bushes, and in suitable spots in trees and cliffs. The female lays 5-10 eggs in the months of May and June.  The females stay close to streams to incubate their eggs and then raise the young, which hatch in late June and July. They take the young ducks to the sea in September and October. After being taken to the coast, the drakes moult their baby feathers and get a new plumage resembling that of a female. The mature males are generally found in a flightless condition

Harlequin Ducks eat mostly marine organisms (mollusks and small fish) and insects (blackfly larvae, stoneflies, caddis flies and midges). They usually dive under the water to capture their prey.  They can also be found walking on the bottom of the river bed looking for larvae under rocks. The Harlequin Ducks must feed continuously due to their high metabolism and small bodies.

There is very little information available on the predators of the H. histrionicus, but it can be assumed that it has the same predators as most other ducks.   These would include raccoons, hawks, snakes, cats and dogs.  Since the Harlequin Duck is an endangered species, and also does not taste very good, it is not hunted by humans. 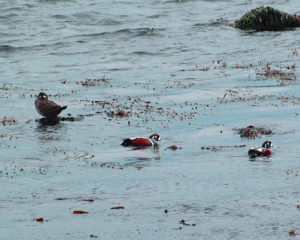