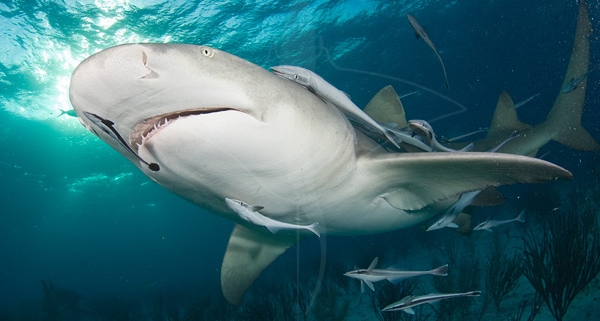 Photos: Thank you to Andy Murch for permission to use of his photo

Identification: The Lemon Shark gets its name from the slight yellowish tint in its skin. It is thought that this yellow colour is used for camouflage in shallow sandy shoals where it spends lots of its time. This shark also has a second dorsal fins that can be as large as the first dorsal fin. Lemon Sharks have a special and highly specialized horizontal pupal or “Visual Streak”, that when underwater, lets them see extremely fine colour and detail. At birth they are roughly 60-65 cm and they will live for an average of 25 years. 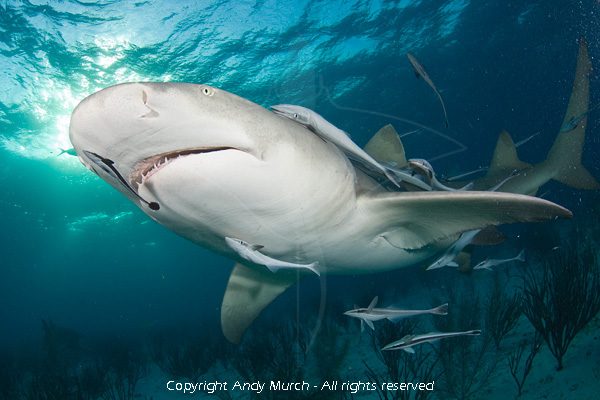 Distribution:  Lemon Sharks spend most of their lives in shallow mangroves. This is where they find most of their prey, as mangroves are common breeding grounds for lots of fish.   Fun fact: Some adult lemon sharks are known to hunt in the mangroves that they were born in, and will actually eat juvenile lemon sharks 😮 .  Lemon sharks are typically inhabitants of coral reefs and tropical waters, and can be found in the Atlantic Ocean along the east coast from New Jersey to southern Brazil and along the west coast of Africa. They are also found in the Pacific Ocean from southern California to Ecuador.  Other common places to find Lemon Sharks are docks, lagoons, salt rivers, and they will sometimes venture into the open ocean to migrate.

Life Cycle:  When pregnant, female lemon sharks can carry their embryos for up to 12 months, and will give birth in the safety of shallow mangroves to up to 17 live pups. During mating, the male will actually clamp onto the female with his jaws, and then does the deed. The pups will reach sexual maturity at around 12 years. When the baby lemon sharks are mature enough, they will start to venture out into the deeper waters of the mangroves to hunt, but they need to watch out as they might become food themselves. Adult Lemon Sharks are sometimes known to return to their birthplace to hunt, for OTHER LEMON SHARKS! Adult lemon sharks will come back to their childhood mangrove home to feed on the juvenile lemon sharks. They know the area very well, and therefore will be able to predict where the pups will hide. In addition to cannibalism, Lemon sharks will also feed on relatively large reef fish, rays, and sometimes even crustaceans.

Behaviour:  Lemon sharks are very social animals, and will often prefer to live in groups. Younger Lemon sharks are often known to venture out of their mangrovial home at a younger age, to join a pod of older sharks. Biologists believe that they do this to learn about hunting, and communication. Lemon Sharks are very friendly and are a welcome sight on many a tropical dive. Only ten lemon shark attacks have been reported, none of which were fatal.

Lemon sharks are near threatened, and are a very common target for poachers, looking to cut off their fins for trade in Asia. Once the fins are cut off, the poachers will dump the body of the lemon sharks back into the water where the sharks will die from its wounds.