By Sarah Roberts and Julia Mitchell

Identifying features: Puget Sound King Crabs are one of the largest crabs on the West Coast, growing up to 30 cm across the carapace. This crab’s main distinguishing features are its box-like body which can resemble a mini army tank, and its brilliant coloring. Juveniles are a bright orange colour, with red and yellow parts. The adults are redder, with yellow, orange, brown, purple, and even blue markings on its body, and are covered in bumps and wart-like tubercles. The carapace is triangular shaped, but rounded at the bottom, and it does not cover its legs which are as wide as the carapace. A differentiating feature from other crabs is that the Puget Sound King Crab has only 6 legs visible, because 2 are hidden in the carapace, whereas other crabs have all 8 legs visible.  It also has 2 chelae (claws) that are cuplike and lined with teeth and bristle-like hairs.

Habitat: Puget Sound King Crabs are found in the subtidal areas up to 137 meters deep. They are most often found in rocky areas with strong currents. They like to cling to vertical walls, and perch on small ledges. Juveniles prefer to be under rocks during low tide. They are found from Southern Alaska to Central California. Little is know about the size of the population, and therefore they are a fully protected species by the Washington Department of Fish and Wildlife.

Food: The diet of these crabs is mainly sea urchins, barnacles, starfish, especially sunflower stars and brittle stars, sea anemones, and other echinoderms. They capture their prey with their claws, and each claw has a specific use for eating their food. The left claw is used to crush the animal, and then the right claw is for cutting it and finer handling of the food.

Predators: To ward off predators, the Puget Sound King Crab has a unique shape which allows it to curl up into an ‘army tank’-like form. The mature crabs dark coloring and bumpy texture help it blend in with its surroundings on the ocean floor, while the Juveniles vibrant orange hue helps it blend in with surrounding coral and sea cucumbers. The crab has large, strong claws with molar-like teeth meant for crushing, perfect for protecting itself with.

Life cycle: In early winter the Puget Sound king crabs move from deep waters to shallower waters to molt and mate. They can only mate once the female crab has molted. After she has molted and mated the female returns to deeper waters and carries the 186,000 eggs with her for a year. Meanwhile, the male and the juveniles remain in shallow waters and will molt during the summer months, and then they will return in autumn. During spring, the females will spend 12-14 days hatching her eggs, and the larvae will spend 2 months in plankton beds before settling at the bottom where they spend the rest of their lives. It takes 7 years for a Puget Sound King Crab to mature, and it remains unknown to how long their life span is. 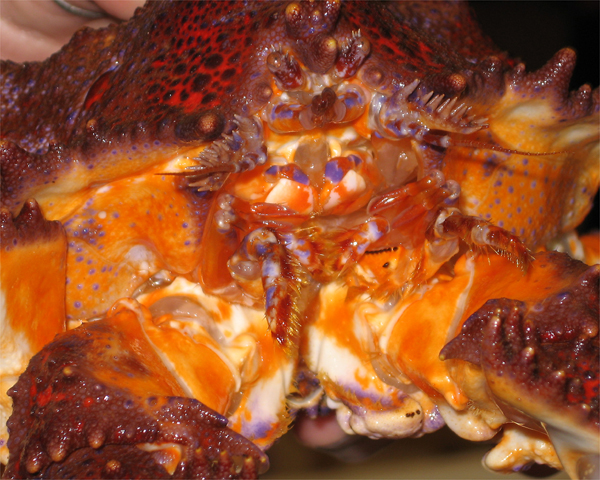 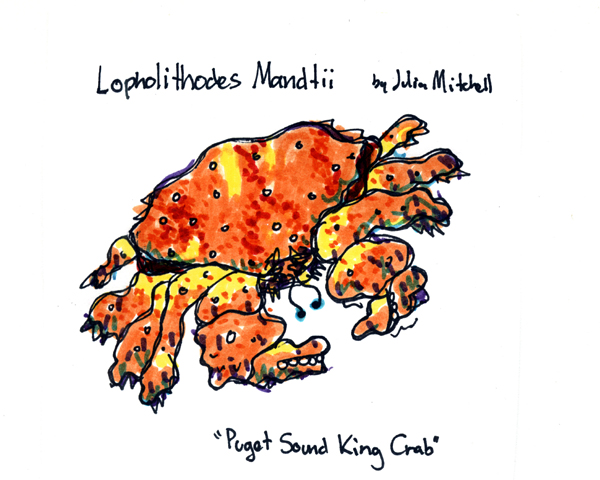