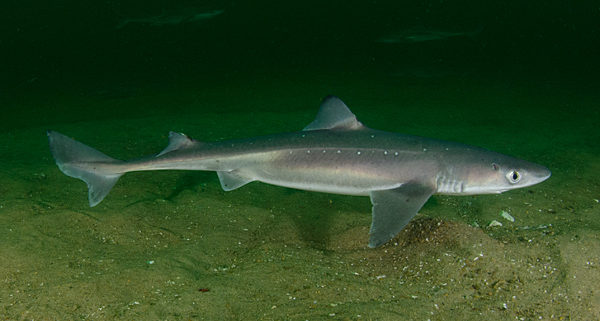 The Spiny Dogfish lives on continental shelves, insular slopes, and upper slopes. They live in depths of 30.5 – 92 metres (100-300 ft) with males living in shallower water than females. They are comfortable in temperatures of 6 – 11C (43-52 F).

Spiny Dogfish love to eat bony fish such as salmon as well as cartilaginous fish. They have a very diverse diet that can include cephalopods, gastropods, crustaceans, sea cucumbers, ctenophores, hydrozoans, jelly fish, squid, octopus, herring, menhadens, capelins, sand lances, and mackerels. They travel and hunt in packs. The pack size can range from hundreds to thousands of Spiny Dogfish. The pack is sometimes segregated by gender. Spiny Dogfish are frequently spotted hunting in packs.

Some of the predators of Spiny Dogfish include cod, red hake, goose fish, and other Spiny Dogfish. They use their spines on the dorsal fin to defend themselves.  Despite having venom in the spines many fish will still attack and eat the Spiny Dogfish.  It also curls up into a bow and strikes at any predator that threatens it.

Males mature at 11 years and females become mature at about 18 to 21 years. They typically mate during the winter. Mating is ovoviviparous. Mating usually takes place in offshore waters and it is internal fertilization. Once the eggs are fertilized, the mother produces a thin, horny, transparent shell around them called a candle, and here they develop within her body feeding off the egg yolk. The litter can range anywhere from 2 to 11 pups and are approximately 20-30cm at birth.  The gestation period of the Spiny Dogfish is 18 to 24 months, one of the longest of any vertebrates.  They live for at least 44 years but can live for as long as 100 years. The population has decreased drastically over the years due to the fact that it takes them a long time to mature and they have such a lengthy gestation period.  They are fished to be used as pet food, fish and chips, fertilizers, oils, and a cheaper version of shark fin’s soup.