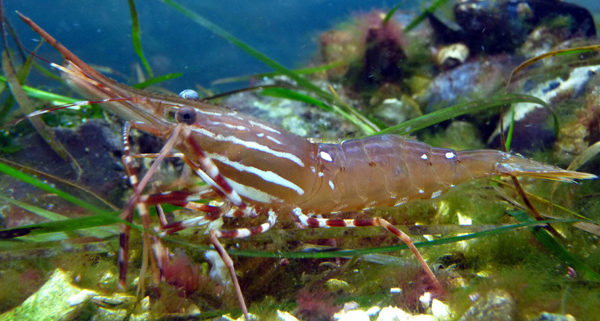 Spot prawn are usually 15-22 cm in length when fully matured, making them larger than most shrimp. Two pairs of white spots on the abdomen identify them. They are of a pink or red-brown colour and have white lines on their carapace. They have an upturned rostrum. Their front two legs don’t have pincers but the second ones have small ones.

Spot prawn are found in the intertidal region, to about 485m beneath the sea level. They range from the northern parts of the Alaskan coast, to southern California, and are also found along the Korea Strait, and in the Sea of Japan.  Their main location along the seashore is on jagged rock faces and sheer underwater cliffs. They move to shallower waters at night to hunt.

Spot Prawn catch thier prey with their long legs and often hunt at night. In general, prawns and shrimp that are less than 1 cm in length eat plankton. When they are larger they will eat small shrimp, small shellfish and worms. They also eat dead crabs and fish. Prawns and shrimp are not very selective about what they eat.

Predators of Spot Prawns, during the early larval stage, are mostly jellyfish and plankton feeding fish such as herring. Animals that prey on adult Spot Prawns include fish (sculpin, salmon and flatfish), seagulls, and crabs. Defences that shrimp and prawns employ to avoid being eaten include fast swimming, quick withdrawal to underwater crevices, and colour camouflage. Adults Spot Prawn hide in eel grass to a avoid predators. Young hide under other algaes such as sea colander kelp.

A female Spot Prawn will produce somewhere around 3,000 eggs, which will then become attached to tiny hairs on her bottom side, under her tail. Depending on the time of year, the eggs will be incubated for anywhere between 4 weeks and 3 months. The eggs will then hatch and begin to float around in the water, eating plankton. After they reach one centimetre in size, they will begin their life on the bottom of the sea. Baby Spot Prawn have a green tint to them. After one year, they will have matured fully into an adult. They then spend two years as male, and then undergo a process changing their sex to female. A male will change his sex early, if the male to female ratio is imbalanced.

With 2450 metric tonnes harvested annually Spot Prawns are BC’s largest shrimp/prawn industry. Fresh prawn are available starting in May for 6 to 8 weeks. According to the David Suzuki Foundation’s Seachoice Programme, the Vancouver Aquarium’s Ocean Wise programme and the Monterey Bay Aquarium’s Seafood Watch; the spot prawn industry is sustainable. 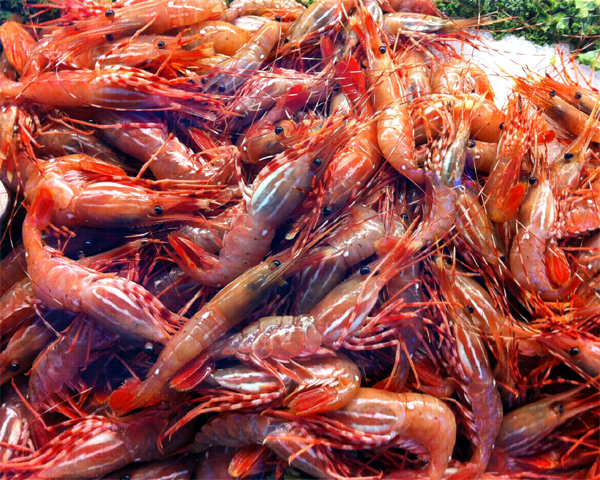