Features:   Sunfish are very interesting creatures. They are so weird that they don’t even look real, they look like something from another planet. But sunfish are very real and very fascinating. The average adult Sunfish grows up to about 1.8 meters. That’s about the size of a full grown person. They are round, flat and oval shaped with a very large dorsal fin at the top and an anal fin at the bottom.  The caudal fin of some Sunfish stretches to the height of their bodies. Thier mouth is constantly open because of the way their teeth are structured. They have a beak like teeth that can chew up things like jellyfish. Near the middle of their body are pectoral fins, they use these fins to swim and change direction. 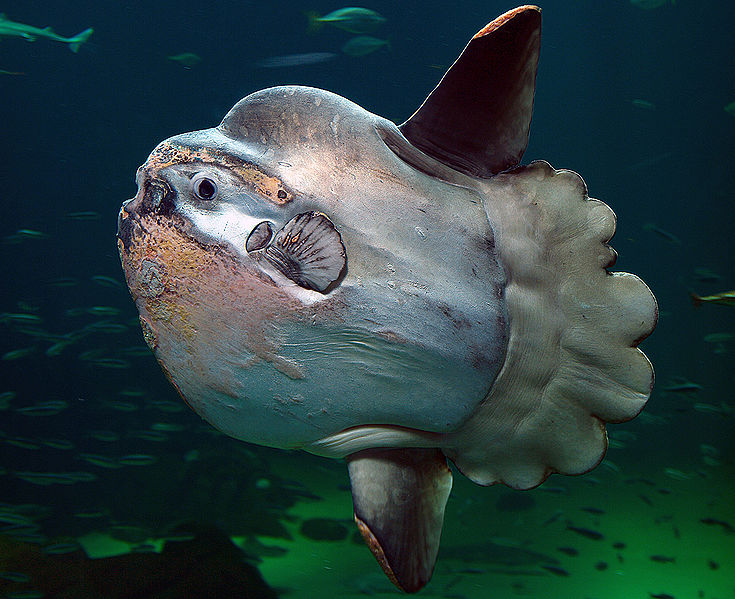 Habitat:  Sunfish are generally an open-water fish that like to live anywhere that it is warm.  Despite this sometimes they will be found far off the coast of the Pacific Northwest in the clear warm water currents that flow up in the summer.  In general they mostly live in the warm tropical waters of Australia, New Zealand, Chile, and South Africa. They live in depths of around 100m to 200m and spend their time alone or with one other Sunfish.

Food:  The Mola mola’s diet used to be considered mostly made up of jellyfish but stomach analysis have shown that is has a very diverse diet depending upon the food it comes across.  The diet consists of mostly small fish and jellyfish, but also crustaceans and even eelgrass. Mola mola are very slow and have trouble keeping up with their prey s0 to combat this they use their mouths to inhale water creating a vacuum and sucking up their prey into their mouths.

Predators:  The ocean sunfish’s main predators are creatures like sharks and sea lions. They don’t have a lot of self defense, their main source is having extremely rough leathery skin comparable to a rhinoceros. Swimming away isn’t an option either, their sheer mass and size and their lack of a “propelling” ability make them very slow. They can swim up to speeds of 3.2 kilometers per hour, while a sea lion that is hunting them can swim up to 40 kilometers per hour. Other than that they don’t really have anything to defend themselves, they can also fling themselves out of the water to defend themselves as a last resort but other than that they are pretty defenseless.

Life cycle:  The female Sunfish will lay about 300 million eggs. The eggs all hatch together and swim in schools. They grow rapidly, losing a tail and growing spines. At 15mm they are in their fry stage, the fry has spikes all around their body similar to a pufferfish. By 37mm they lose their spikes and begin to look more like an adult sunfish. Upon maturity the Sunfish will leave their group and live alone or with another sunfish.

Their skin is as rough as 36 grit sandpaper

The only reason Sunfish haven’t gone extinct yet is because the female produces millions of eggs during reproduction.

Sunfish are very noisy. They grunt often as a form of communication.

They can also projectile poop.