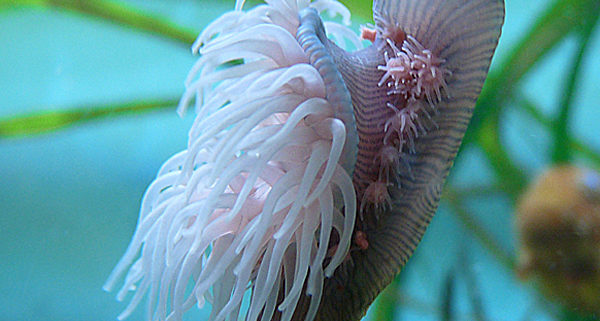 Size range: up to 5cm diameter, does not often exceed 3cm height

Identifying Features: Brooding anemone are often brown to greenish brown, and more rarely almost green, blue, red, pink or purple. One may see baby anemone brooding off the base of a full grown adult which grow up to 5cm in diameter and 3cm tall. Oral disk often marked with radiating white lines, along with the pedal disk and column. On the anterior end, or top of the body you will find the mouth and stinging tentacles.

Habitat: One can find Brooding anemone in subtidal zones, rock benches, surge channels, near crustose coralline algae and other places where they won’t be carried away by disturbances in the sea. They may also be found on leaves of eelgrass which you will see in the picture, although to find red or pink Brooding anemone on eelgrass is rare. Most anemones will spend their whole lives in one place, but if desired they can hitch a ride on hermit or decorator crabs.

Food: Anemones on crabs is a great example of mutualism, while the anemone is protecting the crab and getting a free ride, they can also pick up bits and pieces of food from their messy eating habits. Otherwise, they mainly feed on crustaceans like shrimp and krill. They capture their prey with their stinging tentacles, paralyzing the creature with their thousands of stinging cells located in their stalk and tentacles. Then the Brooding anemone slowly moves the prey down to their mouth where they devour it whole.

Predators: Not many animals will try to feed on Brooding anemones because they attach themselves to their location with their suctioned tube feet and their tentacles and stalk are filled with thousands of stinging cells. But the nudibranches prevail, they’re not only immune to their stinging cells but they can actually take them for their own defense after digesting the anemone. To avoid being seen or easily attacked the anemone will contract at the tiniest threatening disturbance.

Life Cycle: Brooding anemones are hermaphroditic creatures. Their eggs are fertilized in the digestive cavity, and once hatched will swim down to the base of the parent and attach themselves there until they’re big enough to go off on their own and feed themselves. 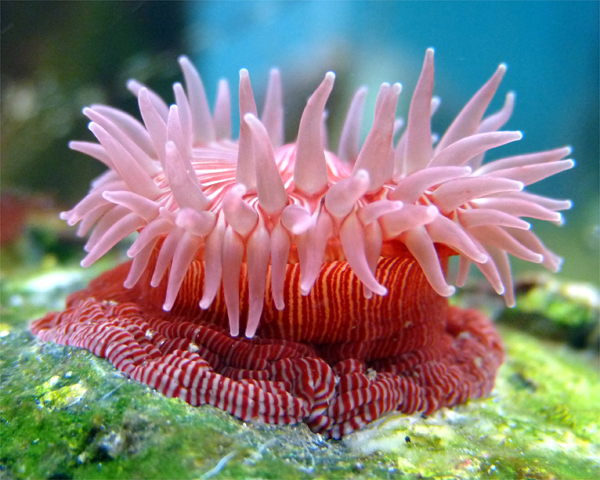