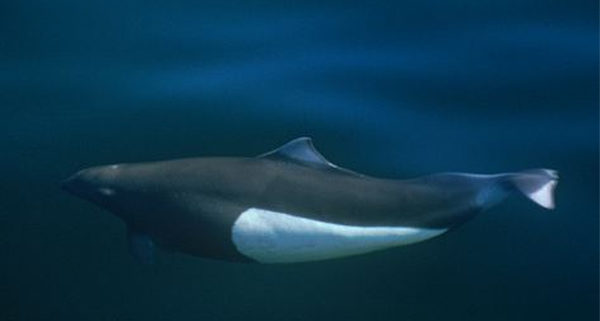 The Dall’s Porpoise has a small head with a narrow mouth and small flippers.  They have a forward tilted dorsal fin that has a small white trim. The tail of the Dall’s porpoise usually has a white strip. The most common way to identify them is by the large white flank on the stomachs.

The Dall’s Porpoise has a wide range in habitat. They are usually found in water at least 1000 kilometers from shore. They can also be found in sounds, near shore waters (near deep water canyons). They like water that is colder than 18◦C and they are most abundant in waters colder than 13◦C. They are found in waters between 3-20◦C.  They appear to prefer waters that are 600ft and deeper. Dall’s porpoises live throughout the North Pacific, along the North American coasts of California, Canada, and Alaska, and the Asian coasts of Japan, Korea, and Russia.

The Dall’s Porpoise doesn’t have a specific food group. Their diet depends on where they live. They eat a wide range of fish and squid in the open ocean and schooling fish in coastal areas. They generally feed at night and eat from 28-30 pounds of food which is 12.7-13.5kg!

Given the size and speed of the Dall’s Porpoise, they are very difficult to catch. Their main predators are Killer Whales and sharks. They largely escape predation because of their color which makes them hard to see and their ability to travel in groups.

The Dall’s Porpoise usually swims in groups of 15-20 porpoises. They stick to these groups and hunt together, however when groups join you can have groups with thousands of porpoises. The other animals that they can be seen associating with are the Pacific White-sided Dolphins and the Pilot Whales.

Photos provided courtesy of Joe McDonald from the ARKive of life website at www.arkive.org

Culik, B (2010) Whales and Dolphins. Dall’s Porpoise. Retrieved May 9, 2012 from http://www.cms.int/reports/small_cetaceans/data/P_dalli/p_dalli.htm