Identifying features: Orcas are easily identified by their distinct black and white markings. They also have a noticeably large dorsal fin, which can vary by gender.  They are “toothed whales”, and their teeth can be up to 10 cm long.  Orcas also make a variety of distinct communicative sounds, and each pod has different noises that its members can recognize, even from far away.  Orcas are a part of the Delphinidae family, also known as the ‘oceanic dolphin’ family.  Orcas have good eyesight above and below the water, excellent hearing, and a good sense of touch.  The whale above is a calf of a transient whale pod taken off of Sidney Spit.

Habitat: Orcas live in resident and transient (or “impermanent”) pods of up to an astounding 40 whales. They are very widespread, and can be found from the polar regions all the way down to the equator. In some cases, orcas have been found in tropical waters and (even rarer) in freshwater! Despite this, they will always be iconic to Canada.  Resident pods can be found on the coast of Vancouver Island from April to November, and usually head inshore for the winter. Transient pods are found in B.C. year-round, but they roam constantly to search for prey. They are mostly found in areas that are home to a vast number of seals.

Prey: Orcas have been noted to hunt in a similar manner to wolf packs, using an effective cooperative method, which has given them the title of “Wolves of the Sea”. They hunt using echolocation (like dolphins).  Their prey is varied, and includes many types of fish, including sockeye salmon (Oncorhynchus nerka), seals and sea lions, such as the harbour seal (Phoca vitulina), other whales, like the humpback (Megaptera novaeangliae), squid ( the opal squid (Loligo opalescens) is one example), and seabirds such as the black-tailed gull (Larus crassirostris).  Resident pods tend to eat more fish, while transient pods prefer marine mammals.  In one extreme case, a pair of killer whales took down a whale shark (Rhincodon typus), which was 26 ft. long!

Predators: Orcas are apex predators and have few natural enemies, as they are very large and are usually found in huge groups. They have never been extensively hunted by humans, and no one has ever been killed by a wild orca whale. Most of the time, the whales mistake humans in the water for seals. The most recent occurred in 2011, when the film crew for the BBC documentary Frozen Planet had an encounter with the whales; they were trying to apparently “wave wash” the crew’s zodiac.  However, in captivity, the attacks are more common and unfortunately have yielded death. In 2010 a captive orca named Tilikum drowned a trainer at SeaWorld Orlando.  SeaWorld has since been fined by OSHA for $75,000 for endangering its employees, and none of SeaWorld’s trainers have been allowed in the water with the orcas since.

Life Cycle: Female orcas can live an average of 50 years in the wild, outliving the males who only live an average of only 29 years. They give birth to new calves every 3-10 years, and pregnancy lasts 17 months. An orca’s main mating season is between May and June.  Not much is known about the actual mating encounters of orcas, so it is uncertain whether or not orcas have the same mate for their whole lifespan. This is unlikely, however, seeing as the females live much longer on average than male orcas.  Young orcas look very similar to adults, even when they’re first born. 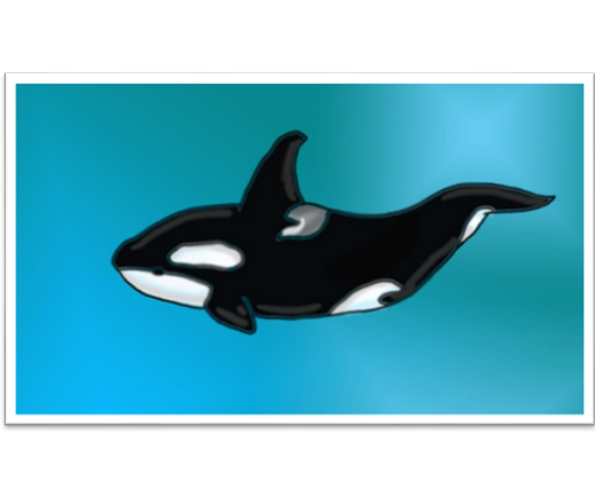