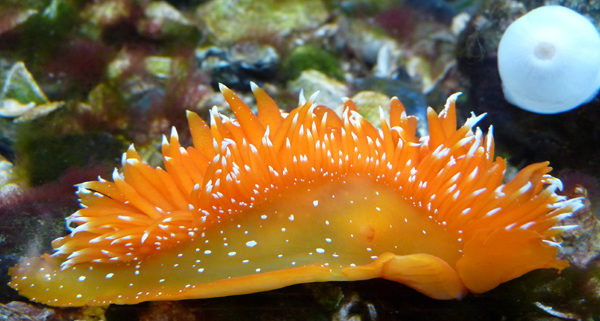 Identifying Features: Dirona pellucida belongs to the Nudibranchia family. It has an eye-catching orange to red-orange color and has white specks on the tips of its cerata (the spiky leaf-shaped structure that covers its back). The cerata aids in the nudibranch’s respiration, but it also is used for defence. Unlike the D. pellucida’s back, its stomach is smooth and almost translucent.

Habitat: Golden Dironas live in the intertidal zones of the oceans, to depths of 60 meters. They can be found in tides from North Sound, Alaska to Puget Sound, Northern Washington, across the Bering Sea until the eastern seas of Japan, Korea and Russia.

Food: Golden Dironas are ectoproct feeders, specifically the bryozoan Bugula pacifica. We sometimes find them on top of sea sponges, not feeding from them but hunting for bryozoans from on top of them. Golden Dironas at times are spotted to be eating other things besides bryozoans as they sometimes feast on hydroids and ascidia.

Predators: The Golden Dirona has a lot of predators. Due to its flashy colour it attracts attention very easily, and its lack of a protective shell makes it vulnerable to predators. Its enemies range from crustaceans to birds and large fishes, depending on where it is located. Like many nudibranch’s the bright coloration of D. pellucida likely indicates to predators that it is toxic.  If attacked they can detach the cerata from their back to distract the predator while they attempt to get away.  As a result some individuals may have a large number of their cerata missing.

Life Cycle: D. pellucida is a hermaphrodite; it has both male and female organs. Once ready to reproduce they seek out to find partners, but despite having both organs having them self-fertilize is very rare. Instead they fertilize each other’s eggs with each other’s sperm. They then lay eggs in an egg ribbon. The eggs would then become trochophore larvae and then develop into vertilar larvae. This is when they hatch and leaves the security of where its parent laid it. The vertilar larvae would then undergo metamorphism and turn into a juvenile. It looks exactly like an adult minus the size and the fact that it isn’t sexually mature.

Behaviour: Many species venture out onto the surface of tide pools when the tide is out and the pools are very calm. They are likely just cruising around looking for food. They can easily hang by surface tension because they have almost neutral buoyancy (no shell to drag them to the bottom). 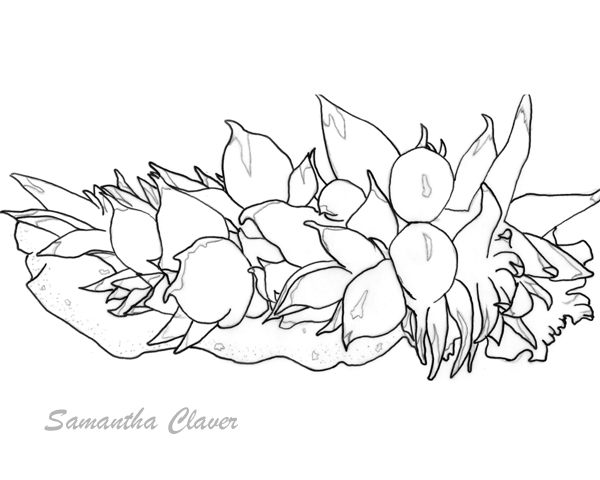