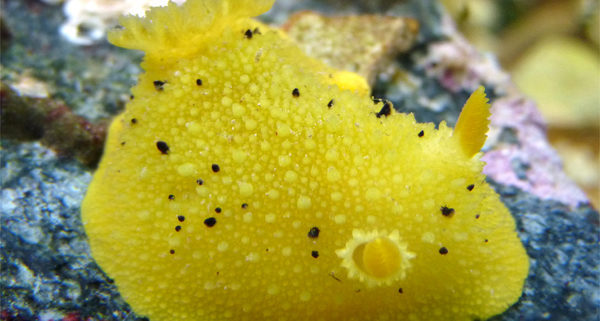 Identifying Features: The Monterey Sea Lemon (Doris montereyensis) is a distinct looking nudibranch with its bright yellow colour however it is easy to confuse with the Noble Sea Lemon (Anisodoris nobilis).  Both have a similar shape, are bright yellow, have distinct tubercles (bumps) on their dorsal side, have feathery gill plumes, and may have a varied pattern of dark spots on their dorsal surface.  There are a number of features that can be used to tell them apart.  D. montereyensis is often described as having a “dingy” colour and is the one that has dark spots on the tips of the tubercles.  A. nobilis in contrast is described as having a “clean” colour.  It generally has a white gill plume, particularly on the outer edge of the plume, and the dark spots if present are only found between the tubercles.

Habitat: The Monterey Sea Lemon is commonly found on the west coast of North America. Its habitat reaches from southern Alaska to southern California. It can be found intertidally and can live in depths of up to 256m. This nudibranch prefers shaded and rocky regions. It is often found in areas with Bread Crumb Sponges.

Food:  The Monterey Sea Lemon preys only on sponges, such as Haliclona panicea, which are commonly known as the Bread Crumb Sponges. These sponges provide the sea lemon with its yellow colour (it is not surprising that the similarly coloured A. nobilis also feeds on the Bread Crumb Sponge). The nudibranch uses its rough tongue (radula) to rub small pieces off the sponges.

Predators:  Similar to other nudibranchs the bright yellow colour suggests that the Monterey Sea Lemon has chemical defenses and is a warning to predators that they should be avoided.  The predation on this species is not well known.  In captivity in our school aquarium a Pacific Spiny Lumpsucker took a bite out of the Monterey Sea Lemon but promptly spat it out.

Life Cycle:  The Sea Lemon is a hermaphrodite. It reproduces throughout the year. It lays several eggs in capsules and the capsules come together to form a yellow chord, which can keep up to 2 million eggs. After the eggs are laid, the sperms that are stored in a “seminal receptacle” become agile and fertilize the eggs. The larvae hatch after about 23 days.

Intertidal Marine Invertebrates of the South Puget Sound. Archidoris montereyensis. Retrieved on May 18, 2010 from http://www.nwmarinelife.com/htmlswimmers/a_montreyensis.html

Lamb, A. and Hanby,B.(2005). Marine life of the Pacific Northwest: A photographic encyclopedia of invertebrates, seaweeds and selected fishes. Medeiva Park, BC: Harbour Publishing. 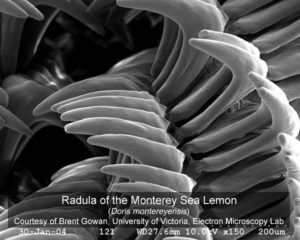 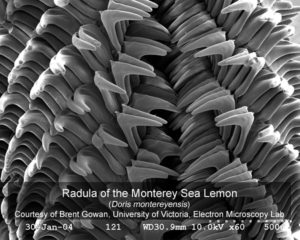 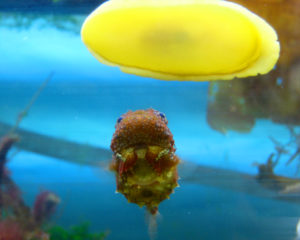 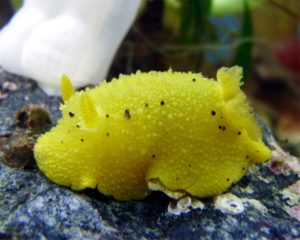