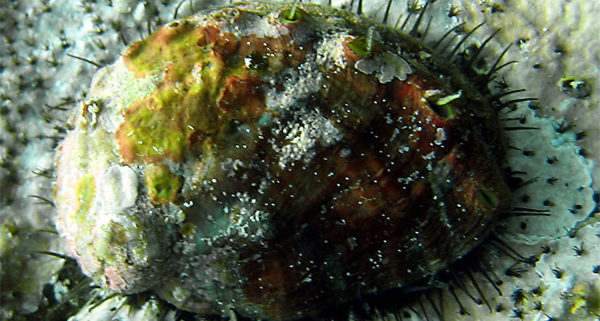 Identifying Features:
The Northern Abalone’s is the only species of abalone in Canada.  Its shell size is 18cm (7in.) across and is usually a reddish-brown and/or greenish colour. The inside of the shell is mostly white,  unlike other abalone that have many other colours inside the shell. In addition, it is oval shaped with 3-6 tubular projections (perforations) and has weirdly designed bumps and thick ridges on the shell. The gills draw water in through the anterior (head) end of the body and it leaves through these perforations in the shell.

Habitat:
The Northern Abalone can be found in Japan, Siberia, s.Alaska to n.Mexico, and in British Columbia, Canada. They are often found around kelp and they cling to rocks. The abalone can live in depths to 35m (116ft).

Food (Prey):
Abalone first start eating phytoplankton then move on to macro-algae and sometimes Giant Bull Kelp (Nereocystis luetkeana).  When they grow bigger, they start to eat drift algae. Abalones have a structure called a radula in their mouth which is like a ribbon lined with rows of teeth.  They use this to rasp algae off of rocks when they are feeding.

Predators:
The animals that eat the Northern Abalone are sea stars, sea otters, fishes, crabs, and octopus. Its major predators are birds, minks, and humans (fishing industries). To avoid being eaten by these predators, this creature hides in between rocks, its foot holds onto rocks, and the algae that grows on its shell helps with its camouflage. The shell is strong and is very difficult to pry off of rocks.

Northern Abalone undergoes sexual reproduction and they send out their gametes into the water.
The fertilized eggs grow into free swimming larvae and disperse all over the sea.  In two weeks or less, they attach themselves to a rock, on which they stay for the rest of their lives. The young ones size depends upon how much food they can find the first year.  During this time the shell usually grows to 1/2″ (10 mm).

Northern Abalone in British Columbia:
According to Louis Gosselin who studies abalone at Thompson Rivers University in Kelowna, BC, the Northern Abalone “is the only species of abalone living in Canada, and it is the only marine invertebrate in Canada to be listed as endangered”.  This is due to overharvesting when they were open to collection and then to poaching once they were protected.  This as well as environmental changes has contributed to the abalone’s decline.  The fisheries was closed in 1990 and the Northern Abalones are now currently protected under the Species at Risk Act (SARA) and the Fisheries Act for the harvesting of them.  The Northern Abalone grows slowly but the Red Abalone (Haliotis rufescens) which is a faster growing species is being farmed and in just three years they are at a marketable size for selling.

Jan A. Pechenik (2005) Biology of the Invertebrates fifth edition

Olin, Thomas and Lockhart, Brennan (2011) – Personal Communication.  Thank you to Thomas and Brennan for preliminary work and contacting Louis Gosselin at Thompson River University in Kamloops, BC.

The Eight Continent Scientific + Graph Services (2009) Save Our Abalone. Retrieved February 13, 2012 from http://www.pintoabalone.org/Pages/pBiology.html 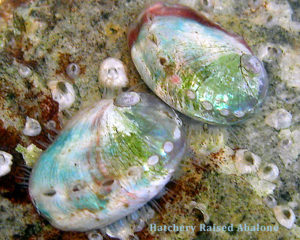 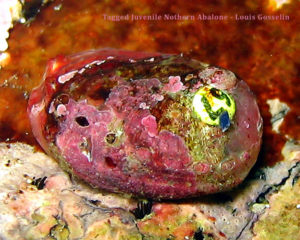