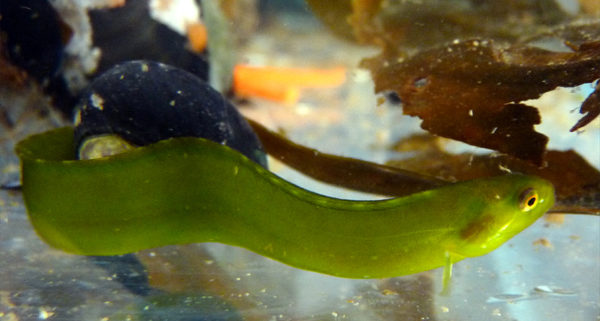 Identifying Features: Rockweed Gunnels have eel-like bodies that are elongated, slender and compressed. They usually have no pelvic fins however if they are visible, they are usually very tiny. They are one solid uniform colour that is often green, yellow or red to camouflage in the algae. They tend to be brightly coloured fishes and their eyes are a striking bright yellow. They also have small circular scales that tend to be difficult to distinguish. Rockweed gunnels have small and conical teeth and their long dorsal fin has 75 to 100 flexible spines and is about twice the length of the anal fin.

Habitat: Rockweed Gunnels are found in tide pools, deep inshore areas or at the bottom of the sea with rocks or algae. Gunnels are also commonly found in coastal waters of northern seas. Many of them can be found anywhere from Vancouver Island BC (Canada), to Punta Escartada, Baja California. Currently, they are 11 species found in North America. Majority of the Gunnels tend to live in intertidal regions and shallow waters in the cold parts of the Northern hemisphere where they feed on their food.

Food: Rockweed Gunnels are carnivorous fish and feed on crustaceans, mollusks, algae or copepods which are found in the sea in nearly any fresh water habitat. They also eat oikopleura which are tadpole-like larvacean and any other marine invertebrates.

Predators: The likely predators of the Rockweed Gunnel are River Otters (Lontra canadensis), the Great Blue Heron (Ardea herodias), larger fish, and other marine birds such as gulls. The Staghorn Sculpin (Leptocottus armatus) is also another predator to the gunnels. Following the tides they enter eelgrass meadows and search for the gunnels below rocks or for other invertebrates buried under the mud. In order to hide from predators, gunnels tend to cover themselves underneath or between rocks and algae. The Rockweed Gunnel can survive out of water for 5 to 20 hours as long as it stays moist.

Life Cycle: Generally, Gunnels will lay eggs in the winter and coil around them in defense. The eggs are then deposited and left there without a mother to care for them. During the summer or spring, they are usually in large groups which travel through rockweed meadows where they hunt for crustaceans and molluscs. 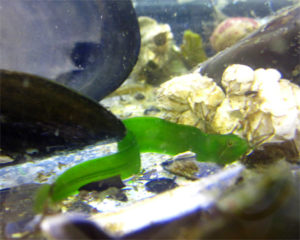 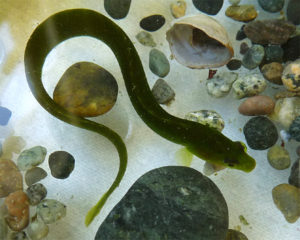