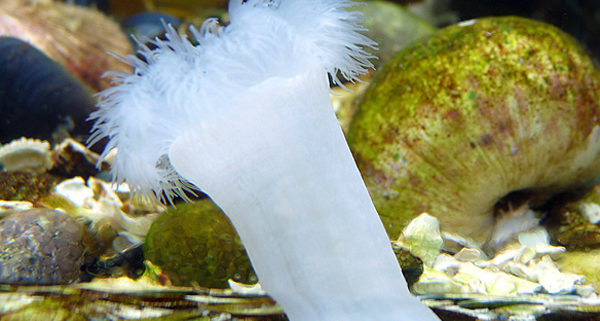 Identifying Features: The Plumose Anemone is usually short from about 2 inches to 4 inches but can get bigger. They’re commonly white or off orange in colour but depending on their living conditions the colours can become bright orange. The tentacles on the anemone are typically transparent but can be off white or orange.

Habitat: Anemones broadly can live in many conditions or habitats. From the tidal zone to up to 100 metres deep you can find these beautiful creatures. Though their preferred locations are exposed sites such as piers, walls, ropes docks or big rocks. Contrary to most sea creatures Plumose Anemones don’t mind brackish water. You can find these critters all over the oceans of the world but especially Alaska to southern California and the other side of North America on the Atlantic coast. Anemones also can be a habitat for other fish such as clown fish with a symbiotic relationship.

Predators: Not many animals attack the Plumose Anemone. In some cases star fishes have been known to eat large anemones. Also nudibranchs commonly eat the Plumose. When anemones are touched they will shrivel up as a defense mechanism.

Food: When small plankton, jellyfish, zooplankton or other small sea critters float by the anemone will reach out with its tentacles and use the nematocyst to poison the prey before proceeding to eat it. The anemones mouth and anus are the same.

Reproduction: Metridium can reproduce either sexually or asexually. Asexually it reproduces by pulling itself into two parts or ripping off pieces of itself and letting these turn into small anemones.  Sexually Plumose will reproduce by releasing its sperm or egg into the sea out of its mouth. Then the little fertilized eggs will grow into larvae which metamorphose into baby anemones.

Photograph and video by Fraser Evans