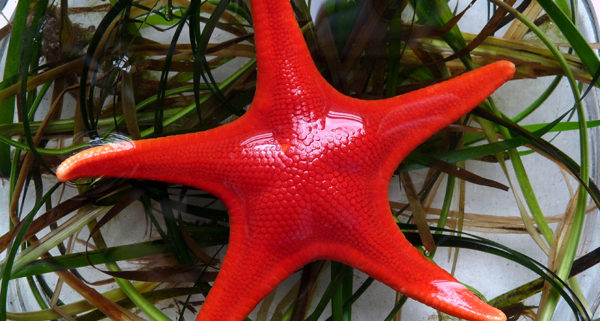 Mediaster aequalis is one of the smallest sea stars ranging in size from three to seven inches. It is a red, 5 armed (rarely,4 to 6 armed specimens) star with a distinctive round texture on its surface. This sea star is named because of its bright color. It is vermillion aborally and more orange on the oral side.

Mediaster aequalis is found along the west coast of North America, ranging from Alaska to California. It is found on many types of beaches at very low tides, particularly on negative tide. The Vermillion Sea Star is common in shallow subtidal waters down to about 160m depth. It is often found on rocks shell, sand, gravel, pebbles and mud.

The Vermillion Sea Star eats a variety of living prey such as sponges, brachiopods, worms, bryozoans, tunicates and the Ptilosarcus gurneyi. It also scavenges dead animals and consumes detritus. Similar to other sea stars, they flip their stomachs out through their mouth and onto the prey they are eating. After selecting enzymes onto its prey and digesting it externally, it pulls its stomach back into its body again.

Sea stars do not have many predators because their outer skin is quite tough. But they do have some predators such as sharks, sea otters and other large fish and sea birds. They can curve their arms and turn into a ball to protect themselves. They also have the ability to regrow their arms if they are eaten by predators.

Sea stars can reproduce in both sexual and asexual ways. Vermillion Sea Stars reach sexual maturity within four years. As sea stars the males and females are in separate individuals. The eggs which are 1 to1.2mm are bright opaqe orange. 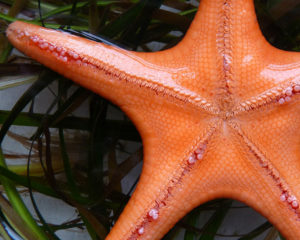 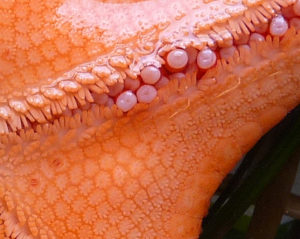