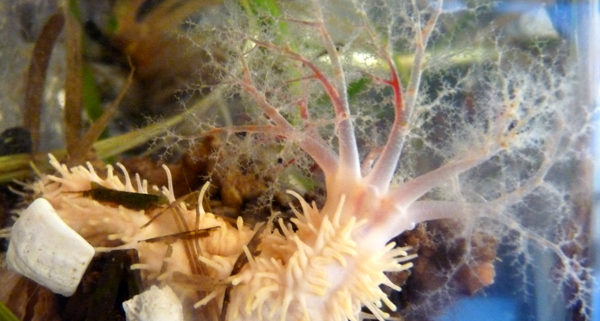 The Stiff-Footed Sea Cucumber is white to cream coloured with eight large, yellow tentacles and two smaller ones which are used to collect food. This sea cucumber has tube-like feet covering its whole body. The size of the cucumber can vary from 4 cm to 10 cm long and its body wall is poisonous to certain types of fish.

Habitat:
This creature can be found under and between rocks along the coasts from Alaska to California. They are often found living in shallow rocky areas and underneath docks.  They are also commonly found along the underside and edges of floating docks.

Food/Prey:
With its mucous covered tentacles, the Stiff-Footed Sea Cucumber is a filter feeder that collects small particles such as plankton and small decaying organic matter for food.  It generally does this by holding its tentacles in the current and filtering out food items that stick to the “tree” of tentacles.  It then takes each tentacle (which is a modified tube foot) places it into its mouth and takes the food off of it.  It then withdraws the tentacle and places it back in the current.

Predators:
The main predator of these sea cucumbers is the sea star Solaster stimpsoni.

Life Cycle:
Sea cucumbers are either male or female and they reproduce by releasing sperm and eggs into the ocean water. Spawning occurs in the spring and the egg, embryos and larvae are greenish in colour. The egg is inserted into a pouch on the adult’s body where it develops and eventually hatches from the pouch as a baby sea cucumber.

Hanby, B. (2005). Marine Life of the Pacific Northwest. Harbour Publishing