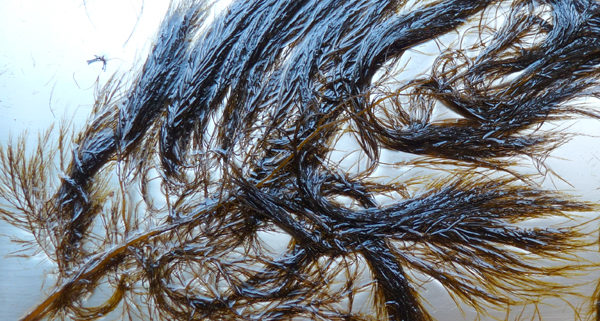 Size: it can grow up to 2 metres long

Habitat: It can be found on the Pacific coast, Bering Sea, Alaska, to Coos bay, Oregon. It commonly lives in pools and on rocks, in the low intertidal and sub tidal zones. They are commonly found washed up on the shore after storms and rough weather.

Identifying features: They are dark to light brown in colour. It is wiry and has strange branching patterns, and strongly resembles hair.  It is connected to a small disc shaped holdfast.   It releases sulfuric acid when it is damaged to ward off predators (it has been suggested that it should be avoided in seaweed collections since it could kill other seaweeds if it is left in the same container).  Witch’s Hair may become quite prolific along floating docks in the Victoria area in the spring and many juvenile fish such as gunnels hide among it while they mature.