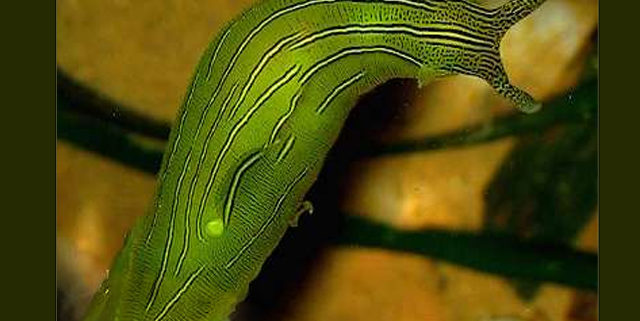 The Zebra Leafslug can be identified by its vibrant green and dull white stripes that may be outlined in black that run down the length of its body.  Though it may grow to 8cm in length they are often found much smaller (3 to 4cm).  There are two colour variations, one that is a deep green and another form that is yellow.  They are most easily found along the blades of eelgrass (Zostera marina) in the summer, where they can safely hide from predators and feed.  The sea hares are named for the long tentacles (rhinophores) that make them look like the ears of hares.

The Zebra Leafslug can be found along the Pacific West Coast, from British Columbia to Mexico.  They are most commonly found in the Northern Pacific around B.C. at a depth of around 5.5 meters and are almost exclusively found on eelgrass (Z. marina).

In general Sea slugs can be both carnivorous and scavengers, but the Zebra Leafslug almost solely grazes upon various species of sponges and diatoms that grow on the surface of eelgrass.

Sea hares such as the Zebra Leafslug are hermaphrodites, producing both eggs and sperm.