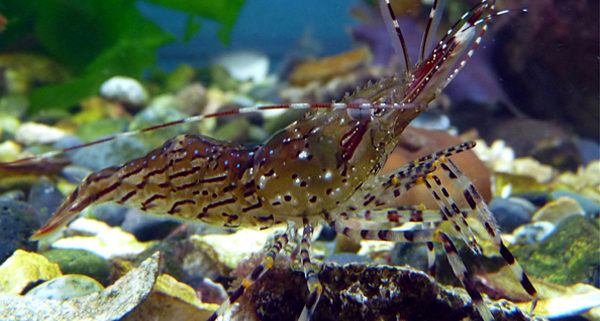 Identifying Features:  The Coonstripe Shrimp is a medium sized crustacean that can be identified by the thin diagonal stripes along its abdomen. It varies in colour, but often has a mix of brown, red, and white surrounding its semi-translucent body. The translucency is used for camouflage and may make them difficult to spot from the surface. This shrimp has large antennae about the length of its body used for feeling around, with large eyes located directly behind them. Along with its large tail, the Coonstripe shrimp has 5 pairs of swimmerets used for forwards momentum.

Habitat: The Coonstripe shrimp generally prefers to stay hidden during the day. Its usual choices are pilings, piers, breakwaters, and sunken logs, but can also be found in bottom sands by rapid currents. During the night they wander and feed, their antennae help them hunt in the dark. They are found in depths ranging from 18 meters up to 200 meters; the young ones are found in shallower water than the adults. The Coonstripe Shrimp occur from California, all the way up the coast to Alaska.

Food: The Coonstripe Shrimp is very aggressive towards its prey, and is also a big feeder. It eats large zooplankton and small crustaceans using its 3 pairs of marillea (feeding hands) to scoop food into their mouth. They also have a small set of pinchers located on their second set of legs used for handling food. It primarily feeds on polychaetes, small sea worms with bristles, which it captures by charging or cornering.

Predators: The Coonstripe Shrimps primary predators are the Lingcod (Ophidian elongate) and the Pelagic Cormorant.  The Cormorant can dive up to 100 feet (30m) to catch the shrimp, and the lingcod scrapes against the sea floor scooping up the shrimp. When the shrimp see these predators coming, they flick their tail forward giving them massive backwards momentum to escape into crevices or to give them enough time to swim away. The Coonstripe shrimp is used for commercial purposes, but is not endangered.

Life Cycle: The Coonstripe shrimp is a protandrous hermaphrodite. They start out as males, and as they age they usually transform into females when the need arises. Before reproducing, females molt into a new, specialized egg-carrying shell, the males deposit a packet of sperm on the underside of the females. The usual spawning period is November, when the eggs are fertilized, to April, when the eggs are released. The eggs are carried until they hatch, and a typical female can carry anywhere from 100-4000 eggs, depending on their size. The Coonstripe shrimp’s lifespan is around 3 years. 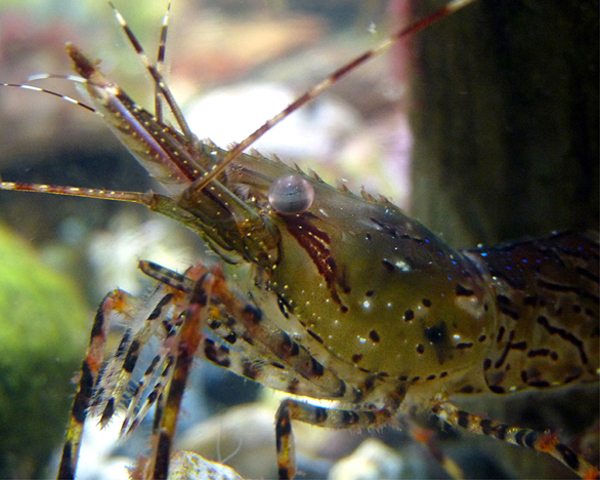