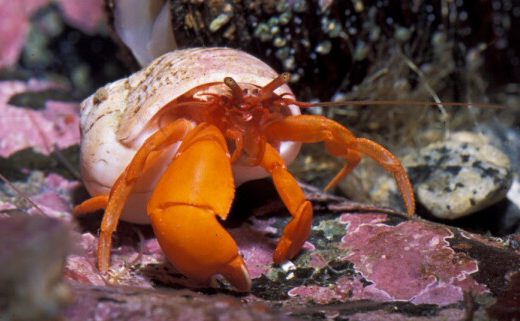 Identifying Features: The Orange Hermit Crab is most distinctly recognizable by its vibrant orange, almost red colour. It has a smooth body with no visible hairs or spines, and stout eyestalks with a non-inflated cornea. The orange hermit has two sets of legs that come out of the shell that they use for walking, and two sets on the inside for moving its body in and out of its shell. Their legs are compressed to resist bending under water, and are a bright blue colour at the upper leg. Their left hand is a wide fixed finger while their right is a much larger, expanded, flattened claw which they use to cover the opening of their shell while they are inside for protection, and for grabbing and fighting. The shells of orange hermits tend to be whitish or grey with brown and pale yellow blotches or streaks, though they find new shells when they grow out of them. Being such friendly creatures though, they will never displace another creature for its shell.

Habitat: The orange hermit crab lives in intertidal waters to 200m (660ft) in the Northwestern Pacific Ocean along the coast of Northern Alaska, down to Northern Washington. They are most commonly found in bedrock or rocky areas with a fast-moving current and thrive in a suitable habitat.

Prey:  Hermits are not fussy eaters; they feed on decaying wood, leaf litter, grasses, plants, items by the shore, and even fallen fruit if available. They locate their food by either smelling, or seeing other crabs eating. These orange crustaceans feed by creating a current with appendages near the head, or scavenge material that drifts by.

Predator: Hermit crabs are preyed upon by a variety of animals. Under water, they must be mindful of many fish such as clownfish, triggerfish, porcupinefish, pufferfish, and the California sheephead, which have powerful jaws for breaking shells, or beak-like mouths for ripping shells apart. Other aquatic animals that eat hermits are octopuses, which coat them in saliva and remove it from its shell or pry the shell apart, and bigger crabs, such as the blue crab, which use their large claws to crush their shells or pull them out. On land, if a hermit crab is washed up, birds often fly by and pick them up! When threatened, hermits scuttle away or burrow in an attempt to hide. For protection, they have their shells, regeneration abilities to grow back appendages, and possibly a symbiotic relationship with anemones, as many hermit crabs are known to have this relationship, but it is uncertain if the orange hermit has this relation or not, though it is likely. The anemones attach onto the hermits shell and eat food left behind by the crab, while defending it by stinging predators with their tentacles.

Life Cycle: At 2 years old, hermit crabs are fully grown and ready to mate. To mate, both crabs must partially leave their shell, leaving them exposed to predators. Once the eggs are fertilized, the female must carry them in her shell for a month, keeping them safe and moist. As the eggs mature, they turn from dark red to grey as they consume yolk. When she is ready to lay her eggs, the mother waits until low tide, travels into the ocean, and releases hundreds of eggs in rocks and crevices. As soon as salt water washes over them, the eggs hatch. Shrimp-like larvae called zoeae immediately then swim to masses of plankton where they are venerable to predators. From there they are carried by currents and dispersed. They are in the zoeae stage for 6-8 weeks before maturing to the larval stage called glaucothe. During this period they molt several times in 1-2 weeks, looking more and more mature with each molt, looking like a cross between a crab and a lobster. After a couple months, the hermit will find a shell, crawl inside, and make its way to land where it will spend the remainder of its life, changing shells as it grows. At 2 years, the hermit crab will be fully grown and is able to mate and continue the cycle, and live for another 10 years as a happy hermit.