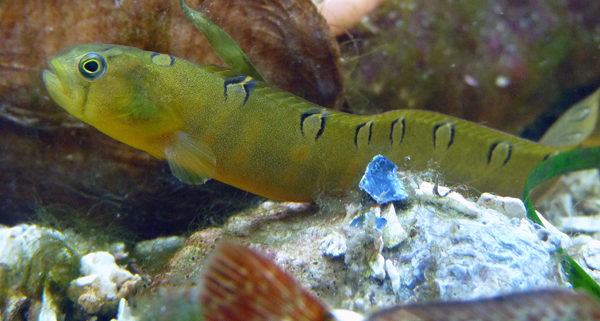 Identifying Features:  Crescent Gunnels may be dark, olive green to a very bright orange.  They have a series of distinct cresent shaped markings along their dorsal surface that may be white to ivory in colour and are often outlined in black.  The individual we have in our aquarium has a very long body with a small head. Its coloring is yellowish-green, darker on the dorsal surface, and has black, crescent-shaped markings with a light color inside of them. These markings are in a series along the base of its dorsal fin. These creatures are common along the beaches of Victoria, B.C.

Habitat: The Crescent Gunnel can be found between the Aleutian Islands and Northern California. However, it is more common throughout British Columbia. It lives 30 to 40 fathoms (55 to 73 meters) beneath the surface.  It can also be found in intertidal areas and underneath rocks protected by seaweed.

Food: The Crescent Gunnel mostly feeds on crustaceans, molluscs, and marine worms. Juvenile crescent gunnels feed on harpacticoid copepods which are a type of benthic copepod.

Predators: The predators of the Crescent Gunnel are marine birds, large fishes, and mammals. Some examples of creatures that feed on them would be the Great Blue Heron (Ardea herodias), the Pigeon Guillemot (Cepphus columba), the River Otter (Lontra canadensis), the Mink (Mustela vison), and sub tidal fishes.

Life Cycle: An adult Crescent Gunnel matures when it reaches 10 cm in length. Females lay a large amount of eggs (about 600 to 1600) in mid-January. Adult Crescent Gunnels usually guard their eggs, although sometimes their eggs are left unguarded. The eggs hatch after about 2 months. The larvae are planktonic when they hatch. The life span of the Crescent Gunnel is 6 years. 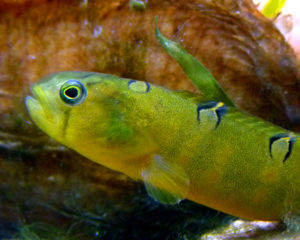 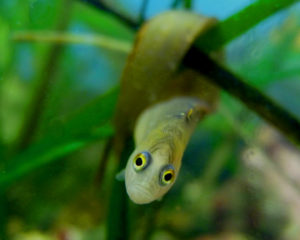