Identifying Features: Like all sea urchins, the Red Sea Urchin has a round circular body and a protective shell, called a test, that is made of calcium carbonate, minerals and proteins. The Red Sea Urchin’s test can be up to 6½ inches (7.6 cm) wide and ranges in colours from red to purple. The test has tubercles where the short and long spines attach.  The spines tend to be lighter than the test and can be up to 3 inches (7.6 cm) long. Sea urchins in general, have tiny holes in their tests where their tube feet come through. 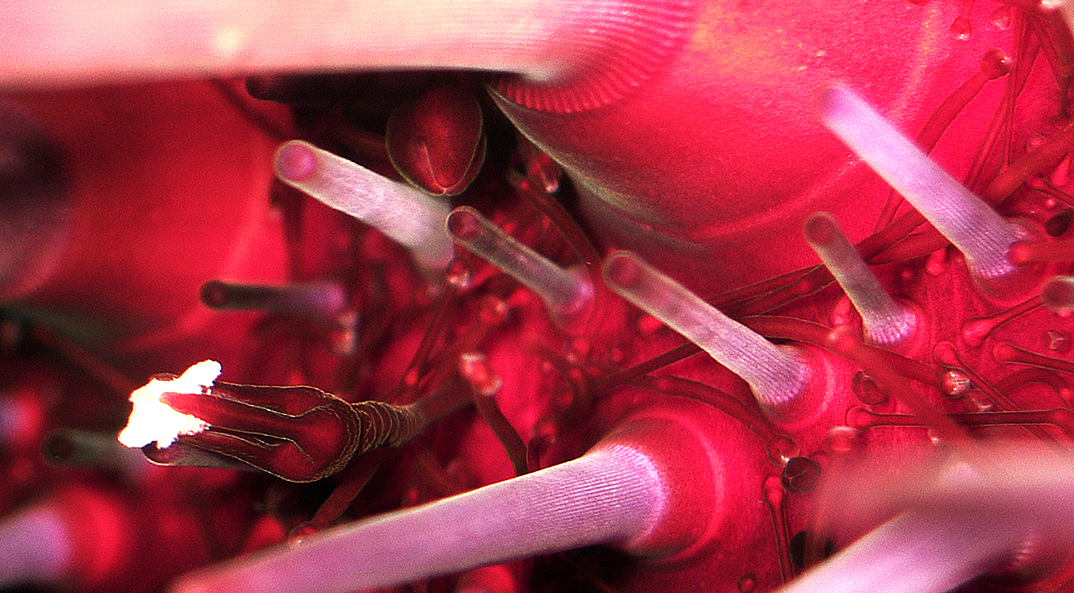 Food: All sea urchins eat seaweed. The Red Sea Urchins prefer to eat kelp (brown seaweed) and red seaweed, however in our aquarium they have been observed eating a diversity of things including Eel Grass (Zostera marina). On one occasion a Bay Pipefish (Syngnathus leptorhynchus) was captured by the tube feet of our Red Sea Urchin and eventually eaten.  Sea Urchins use their tube feet to pass the food that they find into their jaws, where their 5 teeth (aristotles lantern) chew the food as they take it into their mouth and digestive tract.

Predators:  The hard test and spines give the Red Sea Urchin some protection from its predators but they aren’t venomous.  The main predators of this species include sea stars, sea otters, octopus, crabs, and wolf eels. In Japan, people eat the Red Sea Urchin’s reproductive organs as a delicacy.

Life Cycle: Red Sea Urchins fertilize in water column. After a period the fertilized eggs develop into larvae. It takes 6 to 8 weeks for the larvae to develop into juvenile sea urchins. Adult urchins can live up to be 7 to 10 years old.

Lamb, A. and Handby, B. (2005). Marine Life of Pacific Northwest: a photographic encyclopedia of invertebrates, seaweeds and selected fishes. Madeira Park, BC.: Harbour Publishing. 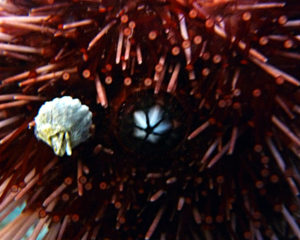 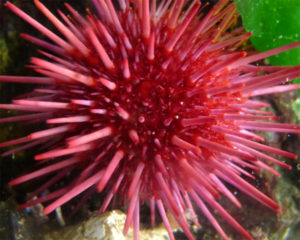