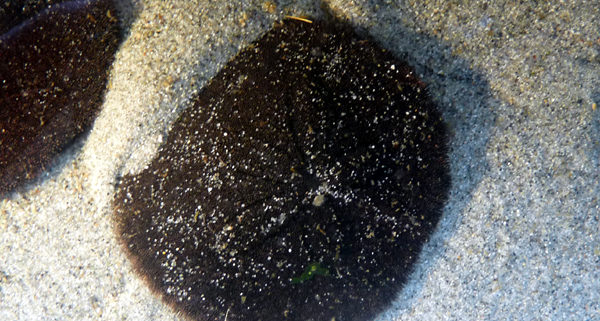 Size Range: Up to 10cm in diameter

Sand dollars have no front, back, head or tail; instead they have a bottom (oral side) and a top (aboral side). They are round disc-shaped creatures that have a diameter generally about 10cm when fully grown. When living, sand dollars are dark purple/black in colour but after death they turn a creamy white. On their aboral side there is a symmetrical design that resembles a flower with five petals. The shell, called a test, is penetrated by small brown spines that give it a velvety look and enable movement.

Sand dollars live in the Pacific, Atlantic, and Arctic oceans.  They live in the sand in the intertidal zone, around 90m deep. They live in groups, called beds, of varying sizes with as many as 625 in one square yard of sand. They prefer sheltered bays, sandy lagoons, or otherwise the shallow water of the open ocean. Generally you will find sand dollars along the North American east coast, or in British Columbia, Siberia or Japan.

Sand dollars eat algae, fragments of organic material, crustacean larvae, diatoms, copepods, and detritus. In calm waters, sand dollars use a method called suspension feeding to eat. In suspension feeding, they position themselves so that one edge of their test is buried in the sand and one is sticking up so that the hole on their oral side (their mouth) is right above the sand and they can catch food sitting or moving on the bottom. Sand dollars have 5 teeth set up in a symmetrical pattern in a structure called an Aristotle’s lantern. It can take them 15 minutes to chew their food and up to 2 days to digest it. They have spines which enable movement. The spines have fine hair like cilia on them that are coated with mucus and bring smaller food to the mouth.  They also have tube feet, which are small suction cup like tentacles about as small as their spines. They use these tube feet to help them move around and bring larger food to their mouth.

Sand dollars, being slow, have many predators, including snails. Their main predators are: the large pink sea star, the Starry Flounder, the California Sheep Head, sea gulls, crabs, otters, and octopuses. To protect themselves they dig into the sand where they won’t be found by any of their predators.

Sand dollars live anywhere from 8-13 years; you can tell how old they are by the growth rings on their test. When spring begins the mating cycles begins too. Once the salinity and temperature of the water is just right the females release their eggs and the males release their sperm. Once sperm and egg meet they immediately develop into larvae via cell division. After a month of floating the larvae settle into the sand and start growing a test to become adults.

How to find and preserve a sand dollar test: The best time to find sand dollars is after a large storm when they wash ashore and die, leaving a white shell, called a test, behind. To prevent them from stinking put them in a diluted bleach solution and let them sit for about 15 minutes. Afterwards rinse them off, let them dry, and you have a beautiful white sand dollar test!  Live ones should of course be left in the ocean.

Lamb, A. Hanby, B. (2005) Marine life of the Pacific Northwest: A photographic encyclopedia of invertebrates, seaweeds and selected fishes. Madeira Park, BC: Harbour Publishing 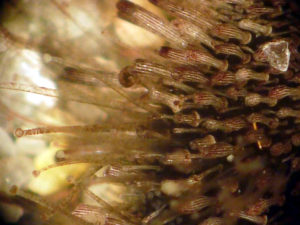